If Israel really is serious about peace, it will release Bargouti – the one man uniquely placed to negotiate an agreement.

The death of Nelson Mandela reminds us that often the first step towards the resolution of a conflict is the release from prison of a national leader who has the authority to unite, negotiate and resolve.

Marwan Barghouti has been in jail since 15 April 2002 when Israeli security agents, posing as ambulance workers, seized him in broad daylight and took him to Israel. In 2004 he was convicted by an Israeli court of involvement in five murders, which he denies.

Despite nearly 12 years behind bars, Barghouti remains the most popular politician in Palestine, capable, according to recent polls, of beating either President Mahmoud Abbas or his Hamas rival Ismail Haniyeh for the presidency.

Many believe he could come out of prison, stand for election, win the presidency, unite the Palestinian factions, negotiate a settlement, put it to his people, win their support and then preside over a process of “truth and reconciliation” in a newly independent country.

With the final prisoner release linked to peace talks due to take place on Saturday, and the end of the talks themselves due a month later (on 29 April), this might just be the dramatic gesture that could save the negotiations from ending in total failure. Abbas has offered to prolong them a little, but only if Barghouti and 12 other MPs are released.

Even Shimon Peres, when he was running for the presidency of Israel, declared he would sign a pardon for Barghouti. In the event, the Knesset never approved his pardon because of the vehement opposition of ministers such as Silvan Shalom, who said: “It is out of the question to free an assassin who has blood on his hands and was duly sentenced by a court.”

But if peace is ever to come, Israel will have to acknowledge that Barghouti was a political and not a military leader, that he never carried arms and that he always opposed actions targeting Israeli civilians, even while defending the right of Palestinians to resist.

An international campaign has been launched to free Barghouti and the 4,227 Palestinian political prisoners in Israeli jails. It is supported by every party in the Palestinian parliament, with Fatah and Hamas united for once, and by the overwhelming majority of Palestinians.

The campaign was launched in Mandela’s old prison cell by the veteran South African politician Ahmed Kathrada, who started the first Release Mandela campaign back in the 1960s and was then jailed himself and spent 18 years on Robben Island with Mandela.

He will be in London next week to urge British MPs to sign the “Robben Island declaration” in support of Palestinian prisoners, alongside Archbishop Desmond Tutu, former Taoiseach John Bruton, Nobel peace prize winner Mairead Corrigan Maguire, political activist Angela Davis and many others.

For British politicians it should be easy to grasp the essential argument for his release. It is not on the basis that he is innocent (though he may be), or that his arrest was illegal (it almost certainly was), but because he is uniquely well placed to negotiate a peace agreement.

Britain jailed Mahatma Gandhi and Jawaharlal Nehru in 1942, but they released Nehru in 1944 and two years later he was negotiating Indian independence. He became the first prime minister of an independent India in 1947.

In Kenya, Jomo Kenyatta was put in prison by the British in 1952 and released in 1961. One year later the British were negotiating independence with him and in 1963 he became prime minister of an independent Kenya.

In South Africa, Mandela was released from jail in 1990 and within months was negotiating independence with his captors. It took just four years from prison cell to president’s palace and the hope is that Barghouti, now 54, can do the same.

Between August 2013, a month after the talks started, and February this year, 34 Palestinians have been killed and 1,535 injured (in the same period there have been three Israeli deaths and 53 injuries). Meanwhile, 10,509 housing units on illegal settlements have been approved by the Israeli authorities. Is there any wonder the Palestinians don’t want to continue the “peace” talks?

As the 29 April deadline approaches, it would take a really bold initiative by the Israelis to prove they are interested in peace. If they release Barghouti the world will recognise that they are serious. If they refuse, many will conclude they are not. 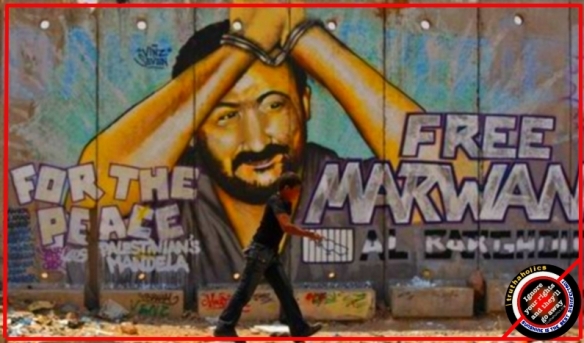 “I, and the Fatah movement to which I belong, strongly oppose attacks and the targeting of civilians inside Israel, our future neighbor, I reserve the right to protect myself, to resist the Israeli occupation of my country and to fight for my freedom” and has said, “I still seek peaceful coexistence between the equal and independent countries of Israel and Palestine based on full withdrawal from Palestinian territories occupied in 1967.” ~ Marwan Barghouti (16 January 2002). “Want Security? End the Occupation”. The Washington Post.

Where is Palestine’s Mandela? ~ Alan Hart, www.alanhart.net. The answer to my headline question is that he, Marwan Barghouti, is in an Israeli jail where he has been since his arrest in Ramallah by an IDF unit in 2002, after which, in 2004, … Continue reading →

The Robben Island Declaration for the Freedom of Marwan Barghouthi and all Palestinian Prisoners ~ Media Review Network | Oct 27, 2013. We, the signatories affirm our conviction that freedom and dignity are the essence of civilisation. People around the globe, and … Continue reading →

Marwan Barghouti: If Occupation Continues, There will be Intifada ~  Palestine News Network. The Jerusalem Post newspaper published yesterday, that Fatah leader Marwan Barghouti said in an interview with channel 10 from his prison cell, that if he were Palestinian Authority president, he … Continue reading →

Marwan Barghouti: Suspect Accusations After the Fact ~ Stephen Lendman. Barghouti‘s a political prisoner. On May 20, 2004, he was wrongfully convicted of involvement in three terrorist attacks killing five people. Acquitted on 33 other charges, he received five consecutive life … Continue reading →

Challenging Israeli State Terror ~ Stephen Lendman Among other methods, lawlessly imprisoned Palestinians do it by hunger striking. Khader Adnan got world attention. He endured 66 days before Israel agreed to release him on April 17. He continues struggling to … Continue reading →