Great Britain has joined the U.S. pressure and provocation campaign against Iran. It is creating incidents to put Iran into a defensive position and to provoke into a violent reaction.

Early today ‘two U.S. officials’ spread a scare story about Iran which lead to this CNN headline: Iranian boats attempted to seize a British tanker in the Strait of Hormuz

Armed Iranian boats unsuccessfully tried to seize a British oil tanker in the Persian Gulf Wednesday, according to two US officials with direct knowledge of the incident.The British Heritage tanker was sailing out of the Persian Gulf and was crossing into the Strait of Hormuz area when it was approached by boats from the Iranian Islamic Revolutionary Guard Corps.

The Iranians ordered the tanker to change course and stop in nearby Iranian territorial waters, according to the officials.

A British warship prevented an apparent attempt by five Iranian small boats to direct a British oil tanker towards Iranian waters on Wednesday, according to two U.S. officials.

The UK defence ministry said that “three Iranian vessels attempted to impede the passage of a commercial vessel, British Heritage, through the Strait of Hormuz.”“HMS Montrose was forced to position herself between the Iranian vessels and British Heritage and issue verbal warnings to the Iranian vessels, which then turned away,” the ministry statement said.
…
“There has been no confrontation in the last 24 hours with any foreign vessels, including British ones,” the Revolutionary Guards said in a statement.

The U.S. officials claimed 5, not 3 boats. They claimed the boats tried to seize the ship, while the Brits just say they probably were getting in the way of the ship. The U.S. officials ‘direct knowledge of the incident’ seems to be lacking. Iran says that nothing happened at all.

There are reasons to believe that the Iranian statement is the most truthful one.

The BRITISH HERITAGE is a crude oil carrier with an overall length of 274 m, a beam of 49 m and a maximum draft of 17.8 m. How three of the typical 20 feet long fiberglass speedboats of the IRGC could try to ‘seize’ or even ‘impede’ such a huge ships is not conceivable.

According to CNN the ship came from Basra, Iraq, had stopped at the Saudi coast and then left the Persian Gulf. It was not carrying any cargo at the time of the incident. That is quite curious as a crude oil carrier is typical loading and not delivering crude to Persian Gulf countries.

Here is a Marine Traffic chart of the last course of the British Heritage. 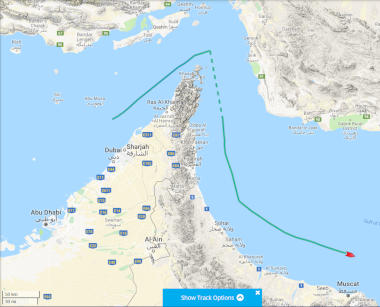 Of interest is also that the ship turned off its AIS signal, see the dotted line, during its passage through the Hormuz Strait.

On July 10, the ship turned off its transponders for almost 24 hours, making it undetectable by radars. When it switched on its transponders at around 1pm Eastern Time, it appeared to have sailed through the Persian Gulf escorted by the HMS Montrose.

Turning of the AIS in a high traffic area and especially at night is quite dangerous. The AIS signals a ships type, speed and course and other ships use that data to plan their own course. But even without AIS the ship will still be visible on the Iranian surveillance radars that control the Hormuz Strait. A ship on the radar screen without AIS information would be suspicious.

So why would the British ship do that? Was that an attempt to draw special attention to it from the Iranian coast guard or military?

To me it seems that the empty British crude carrier, which was shadowed by a British frigate, was used as bait. There were probably Royal Marines on board waiting for an Iranian attempt to seize the ship. Iran did not fall for it.

On July 4 the British military in Gibraltar hijacked the tanker GRACE 1which was carrying Iranian crude oil allegedly to Syria. The ship had planned to receive provisions in Gibraltar. The British controlled enclave changed its local regulations only a day before the ship arrived:

The new regulation, introduced on July 3, allows Gibraltar to designate and detain ‘specified ships’ for up to 72 hours if the chief minister has reasonable grounds to suspect a breach of EU regulations.Crucially, Grace 1 can be held until any other legal proceedings in other jurisdictions against the owners of the cargo or tanker are settled. The seizure has triggered a diplomatic row between the UK and Iran, amid claims the detention was done at the behest of the US.

Tomasz Wlostowski, a lawyer specialized in EU regulatory affairs, found that there is no legal base in EU sanctions law and regulations to nab the tanker.

Today the police of Gibraltar arrested the captain of the ship:

Gibraltar Chronicle @GibChronicle – 14:45 UTC – 11 Jul 2019Police in #Gibraltar have arrested the captain and chief officer of the supertanker Grace 1 on suspicion of breaching EU sanctions on Syria, a spokesman for the Royal Gibraltar Police has confirmed.

The spokesman confirmed too that documents and electronic devices have been seized from the ship.

Both men were arrested on Thursday afternoon interviewed under caution. Neither has been charged at this stage and investigations continue.

On July 3 a U.S. military spy plane crossed into Iranian airspace, twice, likely to provoke an reaction. The pirating of the GRACE 1 on July 4 was a U.S. planned provocation of Iran but carried out by the Brits. The passage of the empty BRITISH HERITAGE without AIS but with a military shadow seems to have been an attempt to lure Iran into a revenge action. When that did not work John Bolton strew the scare story about a failed attempt to ‘seize’ the ship. The Brits say the incident was less serious, and Iran says it never happened. The arrest of the captain of the GRACE 1 is another step on the provocation ladder.

The people who planned these provocation do not understand how Iran acts and reacts. Its military forces are obviously under orders not to react to provocations as such could allow the John Bolton’s of this world to escalate towards a war.

Iran will react to these provocations and especially the British seizure of its tanker. But, as we noted in an earlier piece, its responses to such incidents are nearly always asymmetrical and come at an unexpected place and time.