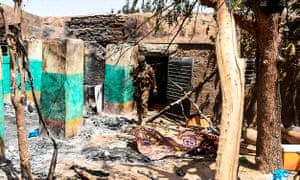 Fighters in central Mali have killed at least 134 villagers in the latest deadly attack blamed on an ethnic militia, local authorities said.

The massacre in Ogossogou on Saturday left the village chief and his grandchildren dead in the ethnic Peulh community, according to a local official who had received detailed accounts from the remote area.

The victims “included pregnant women, young children and the elderly” according to Abdoul Aziz Diallo, president of a Peulh group known as Tabital Pulaaku.

In the capital of Bamako, visiting UN security council president Francois Delattre condemned the killings as an “unspeakable attack” late on Saturday.

At least 55 people were wounded and the UN mission in Mali said it was “working to ensure the wounded were evacuated”.

Militants from a Dogon group known as Dan Na Ambassagou have been blamed for scores of attacks over the past year, according to Human Rights Watch. The umbrella group comprises a number of militia groups from the Dogon villages among others.

The growing prominence of Islamic extremists in central Mali since 2015 has unravelled relations between the Dogon and Peulh communities.

Members of the Dogon group accuse the Peulhs of supporting these jihadists linked to terror groups in the country’s north and beyond. Peulhs have in turn accused the Dogon of supporting the Malian army in its effort to stamp out extremism.

In December, Human Rights Watch had warned that “militia killings of civilians in central and northern Mali are spiralling out of control”. The group said that Dan Na Ambassagou and its leader had been linked to many of the atrocities and called for Malian authorities to prosecute the perpetrators.

The dramatic cliff landscapes and world renowned traditional art of Dogon country once drew tourists from Europe and beyond, who hiked through the villages with local guides. The region, though, has been destabilised in recent years, as has much of central Mali.

134 MUSLIMS HACKED TO DEATH – BUT NO ‘SOLIDARITY’, NO ‘CONDOLENCE’, NO SHEDDING TEARS FOR THEM – WHY?

Because there is no aggrandizement, no limelight, no Yahood and Nasaara to bootlick in this case! The victims are poor, illiterate village folk, off the beaten track, hence no disingenuous dust and smoke is kicked up in bootlicking functions for gratifying nafsaani lusts.

More than 130 people were killed in an attack on a village in central Mali on Saturday by armed men wearing traditional Dogon hunters’ clothing.

Gunmen surrounded the village at dawn before attacking people in their homes in Ogossagou in the Mopti region.

The attackers targeted members of the Fulani ethnic community who are accused of having ties to jihadists.

The attack took place while UN ambassadors were in Mali to discuss increased violence.

The victims of Saturday’s deadly attack were “killed with guns and machetes”, a local security official told AFP news agency.

Witnesses also told AFP that nearly all the huts in the village had been burned down.

The mayor of the neighbouring village of Ouenkoro, Cheick Harouna Sankare, described the attack as a “massacre”.

Clashes between Dogon hunters and semi-nomadic Fulani herders can occur over access to land and water.

The Dogon also accuse Fulanis of ties to jihadist groups. The Fulanis claim that Mali’s military has armed the hunters to attack them.

Last year, hundreds of people died in clashes between Dogon hunters and members of the Fula ethnic group.

On Friday, a Mali-based al-Qaeda affiliate said it had carried out an attack last week on a military base that left more than 20 soldiers dead.

The militants said it was in response to violence against Fulani herdsmen.

One Ogossagou resident, who asked not to be identified, told Reuters news agency that Saturday’s violence appeared to be in retaliation for the attack on the soldiers. From the BBC (End of report)

While considerable dust has been kicked up regarding Allah’s Punishment for the New Zealand Muslims, the morons who are deriving nafsaani pleasure from their public shows and hollow demonstrations of ‘solidarity’, etc., are ominously silent about the greater massacre in Mali. While this too is an Athaab of Allah Ta’ala, and on a greater scale than the New Zealand massacre, the zindeeq morons do not shed even a teardrop, not open their vile mouths in sympathy with the Muslims hacked to death and countless others injured. There is no nafsaani benefit for them in even thinking of the Mali massacre, hence the silence.

The insincerity of those who sympathize with the New Zealanders, but sweep the Mali massacre under the carpet, is conspicuous and loud. All of these miserable characters have no genuine concern for the suffering Muslims. Their motive is to only promote themselves, aggrandizement and other contemptible nafsaani agendas. 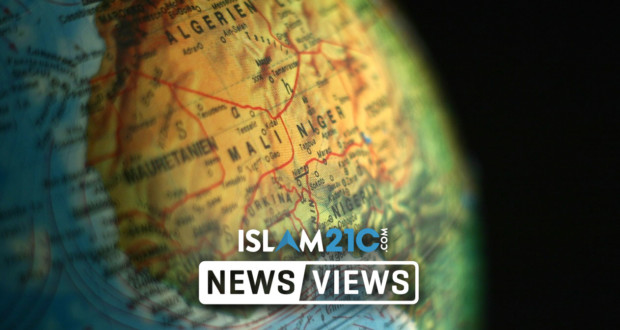 Pregnant women, children and the elderly are among those massacred by hunters

More than 130 people have been massacred and more than 50 wounded in an attack on a Fulani village on Saturday in Mali, the UN has reported.

The shocking massacre took place in Ogossagou-Peul, a village in central Mali, and was carried out by a militia belonging to the Dogon people, according to the governor of the Bankass district which includes the Fulani village.

The attack took place on Saturday morning and, according to witnesses, the militia disguised themselves as traditional hunters and herdsmen when they moved into the village and began the mass slaughter. Among the many victims of the massacre were pregnant women, elderly people and children.

“The Secretary-General is shocked and outraged by reports that at least 134 civilians, including women and children, have been killed,” [1] said Farhan Haq, a spokesman for the UN secretary general. Haq also said that the head of the UN had urged Malian authorities “to swiftly investigate it and bring the perpetrators to justice.” [1]

A video shared on the Australian site news.com.au shows the Fulani village in ruins with many houses on fire and blackened streets with rubbish and debris dispersed everywhere. In another account, bodies were strewn on the ground amidst the burning remains of their homes. [2]

A report published by Human Rights Watch has said that the Dogon militants are responsible for many other similar attacks that have taken place in the past year and that the militants style themselves as ‘self-defence groups’.

“Communal violence has in 2018 killed over 200 civilians, driven thousands from their homes, undermined livelihoods, and led to widespread hunger. The victims are largely ethnic Peuhl targeted by ethnic Dogon and Bambara “self-defense groups” for their alleged support of armed Islamists largely linked to Al-Qaeda,” [3] the report said, tragically highlighting the reach of the tentacles of Islamophobic War-on-Terror logics.

The recent attacks have also been described as a result of climate change. With the increased process of desertification and the scarcity of water, farmers, herdsmen and nomadic tribes have come into conflict over dwindling resources to sustain life.

Commentators are pointing out that the Fulani people, who span across several states in the Sahel region, have historically been discriminated against by the Malian state and have face numerous attacks by other ethnic groups.

The Fulani people are known in the region as more observant Muslims, generally being followers of the Maliki school of thought.  The Dogon ethnic group and others have thus often framed the Fulani-Peul people as supporting “extremist” groups in northern Mali and as such the Malian army has used such accusations as reasons to attack and discriminate against the Muslim farmers and herders.

Saturday’s massacre of Muslim villagers in central Mali, however, is sadly not new as similar attacks have taken place across the region in past years.

Some history of Mali:

Black History Did NOT Start With Slavery

“Mansa Musa, the richest man in recorded history, was a product of such a society. He was known to be a devout Muslim and had performed the Hajj pilgrimage in 1324­. On his return to Mali, he brought Muslim scholars and architects who built five mosques for the first time with baked bricks. Scholars agree that his attachment to Islām enabled him to introduce new ideas and catapult Mali far ahead of its time.”