The Metropolitan Police chief in charge of policing the Notting Hill Carnival has said that he doesn’t care what he arrests people for. His statement comes as police confirm that 656 people have been arrested ahead of the event. And his statement has serious implications for anyone who cares about civil liberties in the UK.

I don’t really care what we arrest them for, I’ll be [as] lawfully audacious as I can to get them off the streets.

So whether they’ve got heroin or they’ve got other class A drugs, [are] drug dealing, [or] serious violence takes place at carnival, we will try to target them and get them off the streets.

According to The Guardian, many people have been released on pre-charge bail. This means the police have yet to decide whether there is enough evidence to charge them with any offence. But it does mean they can impose bail conditions. And many have been banned from the area where the carnival takes place.

As The Canary previously reported, the police are already facing accusations of racism for the way they’ve been conducting their policing operation. And as a spokesperson for the Network for Police Monitoring (Netpol) told The Canary:

Carnival receives this treatment precisely because it is the UK’s largest celebration of Caribbean culture. It helps the police to justify the continued targeting of black communities for the disproportionate use of stop and search powers in London. It reinforces the deeply racist idea that these communities are somehow intrinsically – and uniquely – linked to violence and drug use.

The Met is also facing criticism for its use of facial recognition software at the carnival. Musker claimedabout the software:

It’s not loaded, it’s loaded with people who we know are involved with criminality, who are wanted. It’s not a speculative search tool.

But given the police hold more than 20 million images in their facial recognition database, this statement may give little comfort. Musker also claimed to have consulted privacy groups to ensure:

that what we are doing is proportionate, legal and effective.

But it is not “proportionate” to arrest 656 people when the person in charge of the policing operation doesn’t care what they’re arrested for. It is not “proportionate” to scan whole crowds to see if they match an image. Whether it is “legal” or not is something that will be decided in the future. And “effective” is at best unknown, and only relevant if we don’t give a shit about our civil liberties.

Using pre-charge bail conditions to keep people away from events is nothing new. It is a tactic that the police have often used against protesters. And it has faced much criticism. But this is on a massive scale, and from a Met commander who appears to be utterly blasé about what he’s doing.

This policing operation should worry us all. From pre-emptive arrests to facial scanning, this is not the sort of society any of us should want to live in. And it’s down to all of us to continually challenge and oppose this. Alternatively, we could be waving goodbye to our civil liberties for good.

– Know your rights if you’re stopped and searched.

– If you haven’t been charged with an offence, but have bail conditions, you may want to read this guide from the Green and Black Cross. 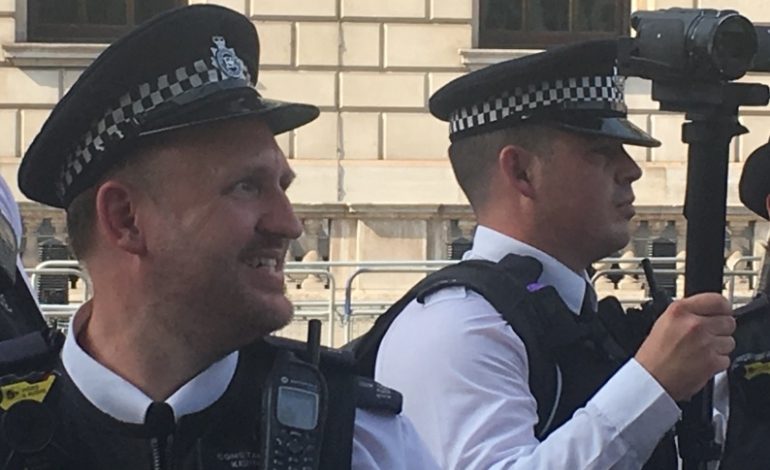 We work closely with the Legal Defence and Monitoring Group on many of our projects, including training and providing legal observers for actions and defendant and court support. Our bustcard is a joint project between LDMG and GBC.

The Network for Police Monitoring is a campaigning group which seeks to monitor public order, protest and street policing, and to challenge and resist policing which is excessive, discriminatory or threatens civil rights. We work with Netpol to share our on-the-ground experience of policing.

Newham Monitoring Project (NMP) is a grass-roots community civil rights organisation, based in East London, supporting members of black, Asian, ethnic minority and refugee communities experiencing misconduct or poor treatment by the police and criminal justice system, or racial harassment or violence. We sometimes collaborate with NMP on trainings or to jointly send out legal observers.

Bristol Defendant Solidarity (BDS) is a legal support group who formed after the Stokes Croft riots in April 2011. We work with them to support people taking action in Bristol.

The UK Action Medics are a group that provide voluntary first aid to people attending demonstrations. They work closely with the GBC Medics group.

Other Comrades and Resources

A website containing some fantastic resources for people struggling with psychological trauma as a result of activism, and for those who support them.

Drop In support space for activists and others struggling against oppression, held once a month at Wellbeing Centre, Tonybee Hall. Email activist.support@riseup.net for details.

A group of activists providing online help and real life workshops showing people how to campaign and organise securely online.

ALP have been a large source of inspiration and information for our resources. These two websites have not been recently updated, so please be cautious before using information found there. Updated versions of many resources can be found in our guides.

Green and Black Cross (GBC) was set up to support the wave of anti-cuts protests in 2010, as the police used violence and harassment to intimidate protesters. We also have roots in supporting the environmental and climate justice movements.

We continue to support struggles for social, economic and environmental justice.

We are a non-hierarchical group and are particularly interested in working with groups which share these ideals; our aim is to skill-share and build capacity for autonomy.

In practice, we are also limited in who we can support by our own capacity. Where necessary, we will prioritise support for groups with similar ideals, groups that are also working to build their own autonomous support, and groups or actions which are most at risk of police repression.

If you would like support for an action you are planning, please read here about the type of support we can offer, and then get in touch.

Use a recommended solicitor with protest experience.

They admit guilt for an alleged offence that might never get to court.

Ask “What power?” to challenge a police officer to act lawfully.