Did Israel Buy Its Way Out of FIFA Suspension? ~ Richard Silverstein, Global Research, Tikun Olam, May 30, 2015.

You’d have to be comatose not to know of the startling revelations of massive corruption in FIFA that amounted to $150-million in the past few years alone.

Eight current or former senior officials were suddenly arrested at dawn at their posh Swiss hotel, where they were preparing for today’s international meeting.  They will be extradited to New York, where the Justice Department will try them for their alleged crimes.  It seems possible, if not likely that Sep Blatter, the FIFA president is in the cross hairs as well, though he isn’t incriminated in the indictments.

Today, he was re-elected to his fifth term in office.  Apparently, FIFA under Blatter has had too much of a good thing and didn’t want to turn off the tap.

Before the arrests, FIFA had been beset by the Palestinian resolution to suspend Israel from the international body because of its violent interference in the affairs of Palestinian soccer.  The violence included arrests and harassment of Palestinian players, refusing to allow them to enter the West Bank to play, and even the brutal shootings of two star players in the feet.  This attack destroyed careers and ruined their chance to ever play professional soccer again.

Earlier today, the Palestinian soccer federation president, Jibril Rajoub, withdrew the motion his group had filed to suspend Israel’s membership.  It’s hard to tell whether he backed down because he no longer had the votes, because he was bought off or because FIFA was bought off.  At any rate, the reaction among Palestinians will be swift and negative.  This is another in a long line of betrayals by the PA of the Palestine national cause.

Israeli media have begun to chronicle the massive propaganda campaign they launched to topple the Palestinian initiative.  Before I recount this, I have to say that Israeli media are willing recruits in the hasbara battle on Israel’s behalf.  So some, much, or all of the following may be discounted as self-serving.  Though it’s nevertheless telling for what it reveals.

For the past month, officials of Israeli national soccer established a war room, dividing up the world into regions with each staff member assigned to a major region, getting to know the soccer officials and present the Israeli pitch.

The international Jewish sports federation, Maccabee, even joined the effort.  A high level official had an especially close relationship with a member of the Vatican Holy See.  Through this channel the Pope was even asked to weigh in on Israel’s behalf by writing a letter to support Israel’s efforts.

One of the Israeli officials was so thankful for the efforts of Michel Platini, head of the European soccer federation, that he said he deserved the Israel Prize, which is awarded to artists and scientists who’ve made great achievements and served the nation.  It’s a cross between the Queen’s Honors List and the Pulitzer Prize.  Platini apparently played a key role in defeating the Palestinian initiative.

One report describes a meeting earlier this week between the Israeli soccer chief, Ofer Eini–a former Histadrut labor chief known for his cozy, corrupt relationships with employers and the government itself–and Sepp Blatter.  After the latter told Eini that he would have to appoint a commission to study the issue of Israeli racism in sport, Eini is reported to have screamed at him:

“You don’t tell me about racism.  Look at the world.  There’s no anti-Semitism?  Six million of us were killed because of it!

The report dramatically recounts Blatter’s stunned reaction and claims he then “understood the message.”

One of the most provocative items in the Israeli report is that among the IEFA officials present in Zurich for the deliberations was its chief financial officer, Dodi Gil.  One wonders why a soccer federation preparing for a vote needs its accountant.  Think of it this way: accountants handle money.  They receive it.  They disburse it. 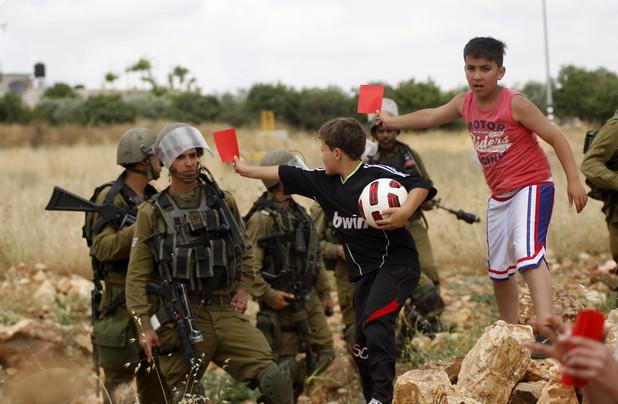 Holding up red card to Occupation

Why might Israel be disbursing money or favors during the deliberations?  Given the context of massive bribery and fraud outlined above, my question almost answers itself.  If you review the history of Israel’s relationships with countries it needed for various purposes, the blandishments range from cash, trade, weapons.  We can rule out weapons as part of Israel’s FIFA arsenal.  But we can’t rule out much else.

Note as well that Israel’s largest financial institution, Bank HaPoalim’s Swiss branch is accused in the U.S. indictment of funneling nearly $15-million (roughly 10% of all the bribery money involved in the entire FIFA corruption scandal) to those FIFA officials on the take.

Eini’s mantra against the Palestinian resolution was that it introduced “politics” into sport, where it has no place.  As if sport was some sort of pure, abstract value divorced from the world.  It’s also laughable to talk about soccer in such terms given the level of corruption that’s been at its heart for years.

The Israeli talking points were so successful that even Rajoub, in conceding defeat claimed Palestine’s effort didn’t amount to introducing politics into sport.  Once you get your opponent to use your own talking points, you’ve won.  So Israel once again outplays Palestine.

His abject failure was crowned by his handshake with Ofer Eini after the resolution failed.  Think of the colonial master who vanquishes the foe and then gets a photo opportunity shaking the hand of the defeated vassal.  Rajoub will come out of this trumpeting his tiny concession: FIFA appointing a committee to “monitor” Israel’s relationship with Palestinian soccer.  That an a few bucks will buy you a cupa Joe somewhere.

To understand how important this vote was for Israel, you must understand the importance of the sport in the nations of the world outside the U.S.  Then you must understand that Israel’s government sees the handwriting on the wall.  It knows what happened to South Africa.  The victories by opponents of apartheid began small.  Then turned into a trickle.  And before the Afrikaaner government knew what was happening, the floodgates were open and apartheid was unsustainable.  Israel sees and fears this above all.  This is why it pulled out all the stops for a victory.

Not that this will work in the long run.  Eventually, justice overwhelms all the stratagems of shrewd clever men who are trying to conceal the truth of their deeds.  Just as BDS will continue to gain ground in this international debate, so will FIFA eventually come around to the position that Israel’s actions are unsupportable.  Then Israel will be suspended just as South Africa faced similar ostracism from international sports.  All this is coming.

Just in case you had the mistaken impression that Israel would tread delicately in the aftermath of its victory so that the Palestinians don’t lose face: Israeli minister, Yisrael Katz, posted this on Facebook:

Rajoub failed in his mission of throwing Israel out of FIFA.  Now’s the time to imprison him in the Muqata [like Israel did to Arafat] and let him play Stanga [hackysack] with his pals.

In a similar vein, Sports and Culture Minister Miri Regev, who denounced African refugees as a “cancer” and then apologized to cancer victims, gave her introductory speech in her new job.  She repeated breathlessly the mantra of “pluralism” as if she it was an amulet to ward off the evil spirits of racism and hate of which her new government is accused.  This was the keeper of her speech:

In the name of pluralism, I will not allow anyone to hurt the image of Israel, the soldiers of the IDF, and of Israel as a Jewish and democratic state.

Someone needs to remind her that she’s no Dorothy in the Wizard of Oz.  She doesn’t click her heels three times and become Wanda the Good Witch.  In fact, she remains the Wicked Witch who curses Israel’s African refugees and spews venom against Palestinians.  No amount of pluralistic whitewash can remove the stench she’s introduced into Israeli political life.

5 thoughts on “#Corruption Did #Israel Buy Its Way Out of #FIFA Suspension?”