Israel Started This War and Killed 1,000+ Based on A Very Big Lie ~ ICARUS VERUM, AddictingInfo.org

Over the past several weeks – Israel’s constant bombing of innocent civilians in Gaza, Palestine has become a front page story. And while many people cling to their own biases and personal beliefs relative to whether or not they view Israel’s actions justified … what is concerning is how so few people actually understand what led to Israel turning Gaza into a death zone. Well – the Israeli government lied to start a war.

In June of this year – three Israeli teens went missing. The Israeli government knew they were dead but put a gag order on Israeli news organizations so they were unable to report this. They flooded Palestinians towns with Israeli military(source), arrested hundreds of Palestinians including people let go in prior political agreements (source), and looted their homes of their valuables (source) all under the pretext of looking for the “missing teenagers”.  Israeli Prime Minister Bibi Netanyahu said there was “unequivocal proof” that Hamas was responsible for what he called “kidnappings” (source) and the US media reported it exactly as he said it.  If you were an American – you were told by the US media via the Israeli government that Hamas kidnapped three teenagers (source).  Netanyahu said he would show the evidence for the world to see (source) … days and weeks went by with no evidence but plenty of military actions against the Palestinian people.

Netanyahu incited violence against Palestinians and said that the Palestinian people will pay for these three kids getting kidnapped (source).  And that’s exactly what he got.  Over 10 Palestinians were killed by the IDF or by Israeli citizens in the coming days; one of them was burned alive by six Jews (source).  One Palestinian American teenager was filmed getting nearly beaten to death by the Israeli Defense Forces for simply not being Jewish (source).  There are to this day gangs of Jewish Israelis roaming the streets in Israel and Palestine looking to harm Palestinians just because of their ethnicity (source).  The message was – you hurt one of ours and we’re going make you pay the price.

For over a week – the Israeli government bombed Gaza unprovoked.  No missiles came from Gaza – the Israeli government said it was “retaliating” for the death of three Israeli teenagers who they said Hamas was responsible for killing.  Over a week of bombing Palestinian civilians in Gaza (source).  When asked for proof that Hamas was involved – this Israeli colonel said Israel didn’t need proof (source) they were simply going to bomb Palestine into the next century.  Operation “Protective Edge” began on July 7th (source) for what Israel called a response to rockets attacking Israel.  In reality – Hamas was really just retaliating against Israeli aggression that led to the murder of Palestinian civilians.

Well – as it turns out – Hamas wasn’t responsible for the kidnapping of those three Jewish kids despite all of the assurances by the Israeli government and parroting by the United States mainstream media.  It was all a lie.

Hanan Ashrawi is a member of the PLO executive committee and she did an excellent job explaining why Israel is responsible for war crimes here:

First – most people do not understand the big picture. So many think this is a religious war that’s gone on for 2,000 years. The person who thinks that is wholly misinformed. The Israeli government has been working for decades to steal as much land from the Palestinian people under the auspice of “security”. Even people who support a 2 state solution understand that geographically – Gaza is not linked to the West Bank which covers East Jerusalem, Ramallah, Hebron etc.

And with that lack of a contiguous border – Palestine has essentially been broken into two parts. Both parts have different leadership; Gaza is run by Hamas and the West Bank is run by Fatah or the Palestinian Authority. Both political groups have had their differences and infighting and this has made it very difficult for them to push for a bid at the United Nations to be a fully recognized country in the eyes of the world. And this bid to be a fully recognized country is what scares Israel the most; in fact – most Americans do not know that Israel to this day refuses to say what their borders actually are. For while the international community regards their borders to be set along the 1967 lines – the Israeli government will not accept this. In fact – even Hamas has called for the recognition of 1967 borders which is a de facto recognition of Israel as a state.

Bottom line – once Palestine is recognized as a country … their borders are recognized officially. And it is exactly this issue that has led Israel to start a war. In order for Israel to keep taking land from indigenous Palestinians in order to give it to Jews from Brooklyn and Russia – it needs there to be no borders. The only way to do that is to stop Palestine’s bid at the UN and the only way to do that is to break up the recent “unity government” between Hamas and Fatah where they have called for an technocratic government to run the show while they demonstrate solidarity.

And Netanyahu (source), his allies and American politicians dedicated to Israel and their wealthy pro-Israel donors have called for the breakup of the Palestinian unit government  (source) and (source).

“All U.S. assistance to the Palestinian Authority should have been be suspended years ago, but openly joining a terrorist organization that kills women and children simply because they are Jewish should convince even the Obama administration to wake up and defund this madness,” said Franks. “With the formation by Fatah and Hamas of a unity government, it is all too clear why recent attempts at peace talks have failed. Peace talks will never be productive while only one party is seeking peace and another is openly courting terrorist allies.”

In the Senate, Ted Cruz (R-Texas) and Rand Paul (R-Ky.), two prospective 2016 GOP presidential candidates, have both called for defunding the PA. Cruz is yet to introduce his bill, while Paul’s Stand with Israel Act of 2014 (S. 2265), introduced June 17, is not expected to pass.

Still, in an op-ed for National Review last week, Paul blasted the White House and State Department for what he views as an indecisive, morally equivocating U.S. attitude towards the murder of the Israeli teens.

At this point, Netanyahu virtually went berserk, and he was determined to break up the unity government. When there was the abduction of the three Israeli teenagers, he found his pretext. There isn’t a scratch of evidence, not a jot of evidence, that Hamas had anything to do with the kidnappings and the killings. Nobody even knows what the motive was, to this point. Even if you look at the July 3rd report of Human Rights Watch, they said nobody knows who was behind the abductions. Even the U.S. State Department, on July 7th, there was a news conference, and the U.S. State Department said, “We don’t have hard evidence about who was responsible.” But that had nothing to do with it. It was just a pretext. The pretext was to go into the West Bank, attack Hamas, arrest 700 members of Hamas, blow up two homes, carry on these rampages, these ransackings, and to try to evoke a reaction from Hamas.

This is what Israel always does. Anybody who knows the history, it’s what the Israeli political scientist, the mainstream political scientist—name was Avner Yaniv—he said it’s these Palestinian “peace offensives.” Whenever the Palestinians seem like they are trying to reach a settlement of the conflict, which the unity government was, at that point Israel does everything it can to provoke a violent reaction—in this case, from Hamas—break up the unity government, and Israel has its pretext. “We can’t negotiate with the Palestinian Authority because they only represent some of the Palestinian people; they don’t represent all of the Palestinian people.” And so Netanyahu does what he always does—excuse me, what Israeli governments always do: You keep pounding the Palestinians, in this case pounding Hamas, pounding Hamas, trying to evoke a reaction, and when the reaction comes—well, when the reaction comes, he said, “We can’t deal with these people. They’re terrorists.”

For images of the effects of this war – you can see HERE, HERE, and HERE. 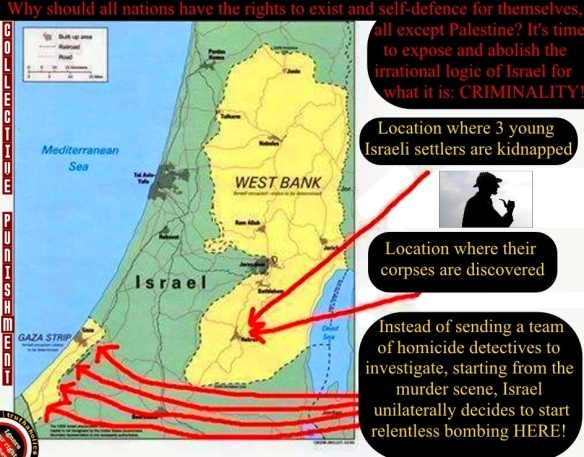