gypt’s deposed President Mohamed Morsi is standing trial Monday to face charges of inciting violence and murder in connection with clashes in front of the presidential palace in the capital Cairo in December.

The trial, which is not being aired live on state TV, is being held at a heavily-fortified police academy on the outskirts of Cairo Monday morning. It is the same venue used during the trial of former President Hosni Mubarak, who was toppled in a 2011 uprising and is currently under house arrest.

Morsi, 62, is facing charges for the deaths of three out of 11 protesters who were killed in the violent clashes during demonstrations against his constitutional declaration, which gave him vast powers that many believed were steps towards authoritarianism.

“The other seven, who were members and supporters of the Muslim Brotherhood, were excluded by the prosecutor from the case,” Mohamed al-Damati, a member of the defense team, told Al Jazeera. “This will also be brought up in the trial.”

Former Egyptian President Mohamed Morsi has been under house arrest in an undisclosed location since being ousted in a July 3 military coup.UesleiMarcelino/Reuters

Morsi, who has been under arrest in an undisclosed location since the July 3 military coup, has rejected the trial and still considers himself to be the legitimate president of Egypt.

Al-Damati said that Morsi did not answer questions during the interrogations, considering them “invalid.”

He added that the defense team, which has no access to the ousted president, received documents of the court case only on Saturday night, although a request for the papers had been filed more than 20 days ago.

Fourteen other defendants will be tried alongside Morsi on Monday, including Essam el-Erian, Vice President of the Brotherhood’s political arm, the Freedom and Justice Party, and Mohamed el-Beltagi, a former member of parliament.

The months since the coup have seen a crackdown on senior members of the Muslim Brotherhood and Morsi supporters.

A coalition led by the Muslim Brotherhood called for a mass protest Monday, triggering the military-backed government to put extensive security arrangements in place.

The Interior Ministry has said that about 20,000 security personnel will be deployed to secure the trial and other state institutions.

The ministry said in a statement that it would take all “security measures to prevent possible attacks in accordance with the law.”

Egypt witnessed one of its worst bouts of violence in decades on Aug. 14, when security forces violently cleared protest camps set up by Morsi supporters, sparking days of unrest that left more than 1,000 dead.

Since then, violent incidents have multiplied: a suicide car bomber tried to assassinate Interior Minister Mohammed Ibrahim in September, and dozens of members of the security forces have been killed in a string of drive-by shootings, explosions and car bombs. Churches have been torched, and in an attack in Cairo last month, five Christian Copts and one Muslim were killed in a drive-by shooting at a church.

Both government officials and Morsi’s supporters forecast bleak scenarios for Monday, with each side accusing the other of plotting killings, including that of Morsi himself.

A senior Interior Ministry official told The Associated Press his ministry had received information that Brotherhood supporters will engage in acts of violence, “including assassinations of top religious figures, suicide attacks and targeting military facilities.”

“We expect a kind of hysteria and rioting when Morsi shows up in court,” he added.

Al Jazeera and The Associated Press 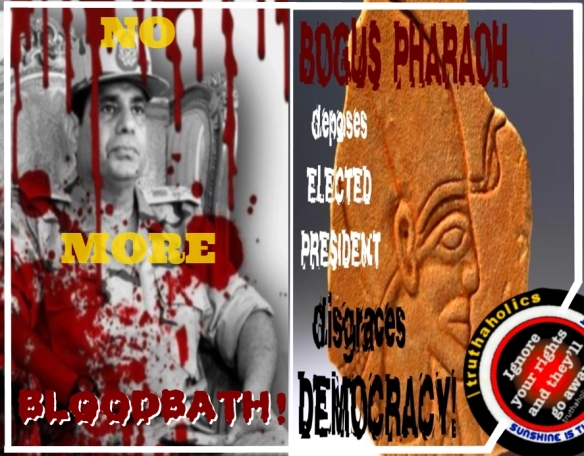 1 thought on “| Coup: Bogus trial for Egypt’s Morsi begins amid fears of violence!”