Respect MP, George Galloway, has succeeded in raising over £160,000 via crowdfunding to finance a documentary on Tony Blair – The Killing Of Tony Blair.

Expelled from the Labour Party in 2003 over his opposition to the war in Iraq, Galloway aims to uncover the former prime minister’s role in “destroying the Labour Party” during his time in office, taking Britain into the war in Iraq in 2003, and his career upon leaving office, which has seen Blair amass a substantial personal fortune as an adviser to various global corporations, governments, and on the international speaking circuit.

Crowdfunding has proved an innovative way of raising money to finance movies, art projects, political campaigns, business start-ups, etc via individual donations in return for equity and/or personal satisfaction at helping to fund a good cause or campaign. Rather than seeking large donations from wealthy investors or banks, crowdfunding is a concept geared towards accessing small donations from thousands of individuals instead. It allows projects and campaigns which otherwise would probably never receive funding to be realised, thus lending them a democratic aspect lacking with regard to conventional funding streams.

Through Kickstarter, the world’s largest crowdfunding platform, Galloway raised the budget for his documentary in forty days from over 4000 individual donations, which came in from all over the world. Using Facebook and Twitter to promote the project, the amount eventually raised has far exceeded his initial target of £50,000. In response, the MP for Bradford West announced:

“Kickstarter has triumphantly demonstrated the power of the people and their hunger for justice. You have successfully raised £163,891 over 40 days on Kickstarter. Thank you and I won’t let you down.”

Tony Blair remains a polarising figure in British politics. Accused of being a war criminal by his detractors, he has never accepted that Britain’s role in Iraq was a mistake and continues to deny that he lied to Parliament or the British people in the lead-up to the war, as many have and continue to allege.

Upon leaving Downing Street, he was appointed Middle East Peace Envoy representing the UN, EU, the United States and Russia – collectively known as The Quartet – in trying to foment a last solution to the Israeli-Palestinian conflict. Critics, such as Palestinian academic, politician, and legislator, Hanan Ashrawi, have accused the former British prime minister of being ineffectual in the role.

“Frankly speaking,” Ahsrawi said earlier this year, “there are no tangible achievements – apart from maybe his frequent flyer points. Blair has an instinctive sympathy for the Israeli perspective. His first impulse is to present Israel’s point of view.”

In addition to his role as Middle East Peace Envoy, and his various business interests around the world, the former prime minister set up The Tony Blair Faith Foundation in 2008. According to the website it “provides the practical support required to help prevent religious prejudice, conflict and extremism.’

In September 2010, Blair published his memoir A Journey, donating his advance of £4.6 million to a centre for injured British soldiers in a gesture variously described by critics in the media as “blood money”, an act of “desperation”, and a “cynical stunt”.

One man who undoubtedly agrees with those critics is George Galloway, whose opposition to Tony Blair and Britain’s wars in Iraq and Afghanistan led directly to the creation of his party, Respect, in 2004. Outlining his objectives with his upcoming documentary, he said:

“In 2003, I was expelled from the Labour Party over my outspoken opposition to Bush and Blair’s war in Iraq. I promised that until the last day of my life I would go on fighting to put Tony Blair on trial, a real trial in The Hague, for war crimes and crimes against humanity. This documentary, the mother of all documentaries, will expose Blair’s crimes.”

“This documentary will not be another sterile chronicle of the Blair years. I witnessed his mendacity firsthand and am able to offer you the inside story. I will pull no punches in going toe to toe with those in the upper echelons of New Labour; the likes of Peter Mandelson and Alistair Campbell are all in my sights and so are the big business bankers he consults for. There is no doubt that the debates will be heated. But from that heat will come light.” 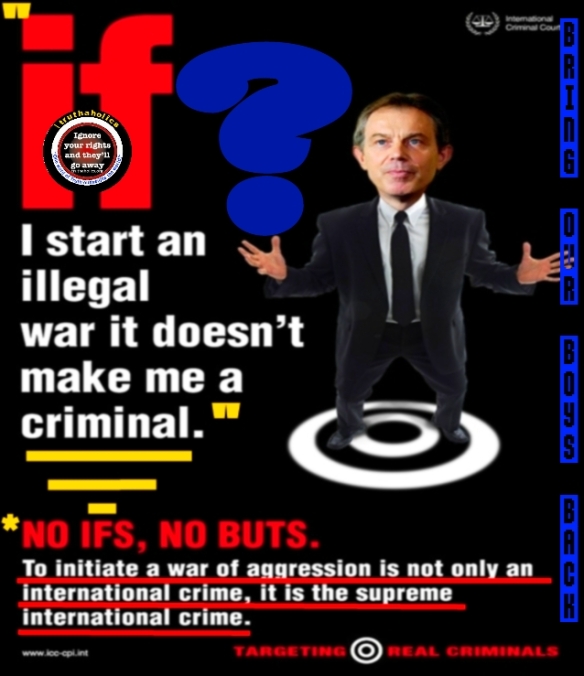