Barack Obama’s first trip to Israel as president seems to have thawed his frosty relationship with Prime Minister Benjamin Netanyahu, at least for public consumption. But it appears to have done little to revive Israeli-Palestinian peace talks, curb illegal Jewish settlement-building or craft a unified strategy to keep nuclear weapons out of Iranian hands.

It was a diplomatic mission with a strikingly unambitious agenda, Middle East experts say, and one that failed to exceed low expectations.

Obama’s prods to Israelis and Palestinians to abandon intransigent positions blocking the path to peace were so gentle as to have passed almost unnoticed. He appealed to young Israelis to “put yourself in their shoes” and acknowledge that Palestinians live in repressive occupation with no state of their own. To the Palestinians who have refused to resume peace talks while the Israeli government bulldozes forward with its construct-and-conquer housing strategy, Obama chided that “there is no point for negotiations” if they insist on resolving what divides them as a precondition for returning to the table. 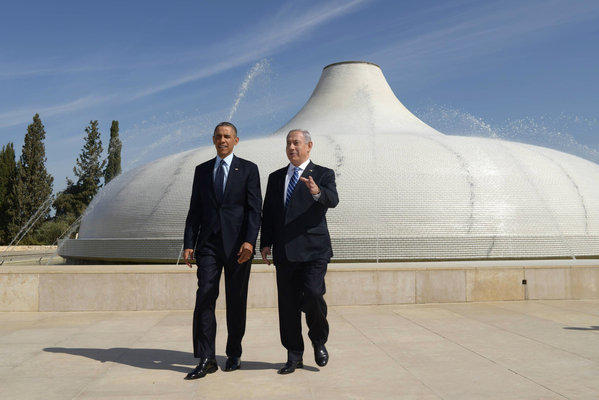 President Obama and Israeli Prime Minister Benjamin Netanyahu sought to exude a friendlier image of their relationship during two days of talks and touring. The two leaders are seen here after their visit Thursday to the shrine of the book in Jerusalem. The president’s first trip to Israel is seen by Middle East analysts as long on symbolism and short on results. (Israeli Government Press Office / March 22, 2013)

Most worrisome, say those who monitor the volatile region, was a sense that the Obama administration was simply checking off a neglected foreign policy matter from its second-term to-do list. Having tried, however feebly, to break the stalemate in pursuit of a two-state solution to end decades of conflict, the White House can now pass off the task to Secretary of State John F. Kerry and return its attention to the mountain of domestic challenges. 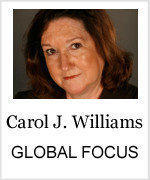 Obama’s popularity among Israelis has plumbed new depths for an American president since his 2009 visit to Cairo, a gesture aimed at opening a fresh chapter in U.S. relations with the Muslim world. Israeli polls show a meager 10% approval rating for the U.S. president.

Political conservatives who dominate the Israeli government see Obama as reluctant to back immediate and credible threats of punitive airstrikes against Iran if the Persian state continues to pursue nuclear weapons capabilities. And Netanyahu’s obvious preference for Republican Mitt Romney in last year’s presidential election did little to dispel the impression that neither leader cares much for the other.

Carefully scripted appearances in Tel Aviv and Jerusalem allowed Obama to recast himself as emissary of Israel’s closest political friend. He and Netanyahu traded jovial one-liners in the presence of media microphones and were pointedly seen putting their heads together for a serious chat during Wednesday night’s state dinner. Beyond the atmospherics, though, the two-day visit left little changed.

“If there was any clear message, it was that peace is not going to be achieved by this generation of Israeli leaders,” said George Bisharat, a professor at UC Hastings College of the Law in San Francisco and senior scholar at the Institute for Palestine Studies think tank.

Obama chose to direct his one impassioned appeal for peace and justice to university students on Thursday, signaling that he has given up on the prospects for progress with Netanyahu and his newly installed coalition dominated by hard-liners, Bisharat said.

Israeli construction of Jewish settlements in territory seized from Palestinians during the 1967 Middle East War has accelerated to the point where there is no hope of creating a viable Palestinian state, Bisharat said. Despite the U.S. leader’s visit, he added, “there is nothing on the political horizon that promises to slow the Israeli colonizing juggernaut.”

Obama’s appeal to Israelis to respect Palestinian rights to self-determination, freedom of movement and pursuit of a prosperous life “might have somewhat heartened” the Palestinians, Bisharat said. But he expressed dismay at Obama’s reference to a two-state solution in which Israel would be for the Jews and Palestine for the Muslims, calling it “the equivalent of declaring support for a white South Africa” in the era of apartheid.

Rebecca Vilkomerson, executive director of the Jewish Voice for Peace group that promotes democracy, justice and human rights for all in Israel, was likewise disappointed, though not surprised, by the visit’s failure to convey that many American Jews are opposed to the hard-line rhetoric and divisive policies thwarting a negotiated peace.

“There were no new initiatives unveiled, no next step to come out of it. I felt like he was just checking off a box,” said Vilkomerson of the visit, which she likened to “Kabuki theater.”

Those opposed to the “extremist agenda” of the American Israel Public Affairs Committee that dominates the shaping of U.S. policy on Israel have despaired of seeing Washington take the initiative in fostering peace, she said.

“The European Union is starting to lead on this issue, with the rise of the BDS approach, the Palestinian call for an anti-apartheid movement in the South African model,” Vilkomerson said, referring to the Boycotts-Divestment-Sanctions strategy aimed at punishing Israeli occupation of Palestinian lands.

Hopefully, she added, pressure will mount on Washington to use its clout with Israel to rekindle the peace process, “but I don’t think it will happen in this administration.”

“He’s not even trying to move the ball. This visit is an investment, a restoration, a reset” of stilted U.S.-Israeli relations, said Robert Danin, senior fellow for Middle East and Africa studies at theCouncil on Foreign Relations.

“Obama is not at a stage where he is going to roll up his sleeves and do it himself to get things going, he’s not going to expend the political capital that would take,” Danin said, referring to the congressional gridlock and pressing economic matters awaiting his return home.

“This visit has a going-through-the-motions quality to it,” Danin said. “It’s like campaigning — he hates it but it’s got to be done.”

Scotland to vote on independence in September 2014

A foreign correspondent for 25 years, Carol J. Williams traveled to and reported from more than 80 countries in Europe, Asia, the Middle East and Latin America.