The military’s small, top-secret version of the space shuttle rocketed into orbit Tuesday for a repeat mystery mission, two years after making the first flight of its kind.

CAPE CANAVERAL, Fla. — The military’s small, top-secret version of the space shuttle rocketed into orbit Tuesday for a repeat mystery mission, two years after making the first flight of its kind.

The space plane, dubbed the X-37B Orbital Test Vehicle, was launched into orbit hidden atop an Atlas V rocket Tuesday for a classified Air Force mission that could last more than nine months.

This is the third time the Air Force will send an X-37B into orbit. It resembles a miniature space shuttle, is 29 feet long with a wingspan of 15 feet, and draws solar power for energy using unfolding panels.

While the Air Force has said the space plane is designed to stay in orbit for 270 days, it hasn’t said much about the overall mission. It has said only that the vehicle provides a way to test new technologies in outer space. In fact, launch commentary ended 17 minutes into the flight, and a news blackout followed.

These high-tech mystery machines are about one-quarter the size of NASA’s old space shuttles and can land automatically on a runway. The two previous touchdowns occurred in Southern California; this one might end on NASA’s three-mile-long runway once reserved for space shuttles.

Jonathan McDowell, of the Harvard-Smithsonian Center for Astrophysics, speculates the space plane is carrying sensors designed for spying and likely is serving as a test bed for future satellites. He dismisses rumors of “exotic ideas” for the X-37B, such as weaponry or shadowing a Chinese satellite.

While acknowledging he does not know what the space plane is carrying, McDowell said onboard sensors could be capable of imaging or intercepting electronic transmissions from terrorist training sites in Afghanistan or other hot spots.

The beauty of a reusable space plane is that it can be launched on short notice, McDowell said.

What’s important about this flight is that it is the first reflight.

“ That’s something that has only really been done with the shuttle,” he said.

The two previous secret X-37B flights were in 200-plus-mile-high orbits, circling at roughly 40-degree angles to the equator, as calculated by amateur satellite trackers. 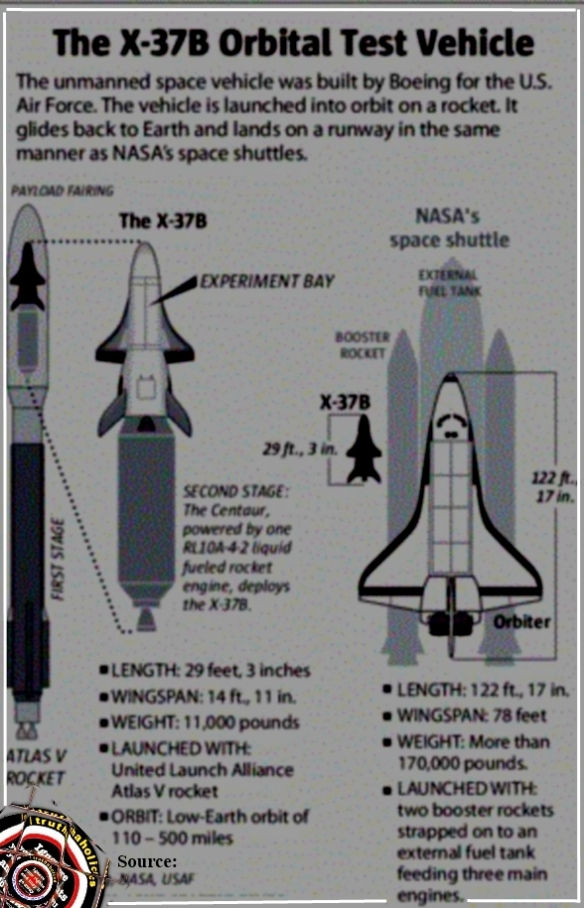