Among the victims were defence minister Daoud Rajiha and his deputy and the president’s brother-in-law Assef Shaukat who were killed when a suicide bomber reportedly set off a powerful explosive device as the cabinet meeting got underway at the security headquarters in Damascus, Wednesday, around mid-day local time.

This was the deadliest attack yet on the inner circle of President Assad. It is not clear if he was due to attend the meeting.

While two groups claimed responsibility – the Syrian Free Army and a little-known jihadi organisation calling itself the Lord of the Martyrs Brigade – the weight of evidence points to crucial Western military support in executing the strike. 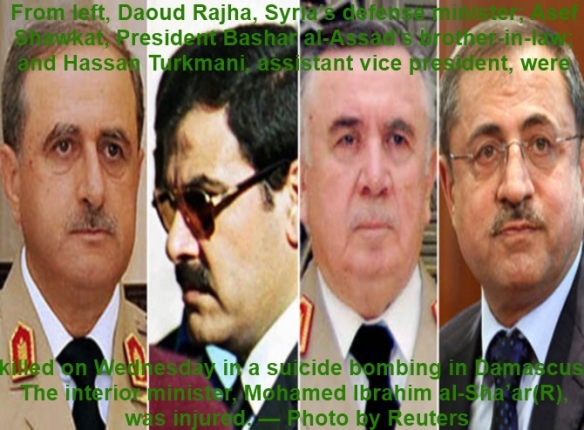 Over the past 16 months, the armed opposition groups in Syria have been transformed from disorganised gangs engaged in hit-and-run skirmishes with the Syrian state forces to what is now a formidable insurrection capable of mounting bomb and mortar in the capital, Damascus.

During March and early April, up until the Kofi Annan peace plan was announced in mid-April, the Syrian government forces had made significant gains in routing the armed groups from strongholds in Homs and other northern towns. Since the Annan initiative was attempted, however, there has been a sea-change in military capability among the so-called rebels groups.

These groups never even pretended to implement the Annan six-point plan and were given strident support by American, British and French leaders in their rejection of any political process to find a peace settlement. Western governments have resolutely demanded that Assad step down as a prerequisite for any political transition, thus giving a green light to further violence.

The surge in opposition violence – which does not have any internal popular base among Syrians – can be traced to the Western-backed so-called Friends of Syria meeting in Istanbul on 1 April, which pledged $100 million in funding for the armed opposition groups.

The latest deadly attack at the heart of the Syrian government points to high-level intelligence and coordination. This dramatic rise in military capability by the armed groups is a culmination of steadily increasing involvement of Western and Turkish Special Forces since conflict erupted on 15 March 2011, and the flow of weapons into Syria from Turkey funded by the Western-allied Persian Gulf Arab sheikhdoms.

Since the beginning of this year, there have been a string of sophisticated, lethal no-warning car bombs in Damascus and Syria’s second city, Aleppo. On 10 May, twin bombs outside the Syrian military intelligence headquarters claimed 55 lives. The involvement of suicide bombers also points to the Saudi and Qatari-backed Sunni extremists of Al Qaeda ilk, operating out of Libya, Iraq and Lebanon. These groups have a long, murky history of liaison with Western intelligence agencies going back to Soviet-era Afghanistan and more recently in the NATO toppling of Libyan leader Muammar Gaddafi.

In the aftermath of the Cabinet meeting explosion, there are reports of fierce gun battles across the capital between Syrian security forces and opposition groups. The sound of grenades, mortars and other explosions were also heard in different quarters of Damascus. There were unconfirmed reports of an explosive attack near parliament buildings and on elite army barracks responsible for guarding the presidential palace.

Last night, the Syrian authorities were claiming that many arrests of armed groups had been made and that order had been restored. The information ministry blamed Arab news channels, Al Jazeera and Al-Arabiya, for exaggerating and distorting the violence.

Nevertheless, it seems clear that the armed groups have gained substantially greater military power and logistics to take their fight for the past three days to the centre of the Syrian government’s administration. The apparent confidence espoused by opposition spokesmen, in what they are calling Operation Damascus Volcano, suggests that these groups have received some kind of external assurance as to their objective of bringing down the Assad government.

The assault on the capital comes as Washington and London step up political pressure this week on Russia and China to back a UN Security Council resolution that would pave the way for a Libya-style NATO military intervention.

Earlier, Clinton had provoked international consternation when she issued a grim warning to Russia and China that they would be made to “pay a price” for not backing Western efforts to put tougher sanctions on Damascus – an ally of Moscow of Beijing.

Russia’s foreign minister Sergei Lavrov decried the use of such threatening language and said that the Western powers were trying to blackmail Moscow into adopting their adversarial position towards Syria.

Following the killing of Syria’s Cabinet members, Britain’s foreign secretary William Hague reacted immediately to renew the pressure on Russia and China to accept the Western sponsored resolution. He said: “All such events increase the arguments for a strong and decisive resolution from the United Nations. I think it is clear that situation is deteriorating rapidly.” Somewhat knowingly, Hague added that Syria was threatened with “chaos and collapse”.

Since May 24, several massacres in villages across Syria by Western-backed mercenaries have so far failed to dislodge Russia and China’s support for Damascus. Is the latest atrocity against Assad’s Cabinet and members of his own family “the price” that Hillary Clinton warned of?

WHO IS BEHIND DAMASCUS BOMB?

2 thoughts on “| Syria’s deadly bomb attack on Assad Cabinet: Is this ‘The Price’ Clinton warned of?”