Eye in the Sky Spying on Americans ~ Stephen Lendman

Money power runs America. So do lobbies representing all corporate and other interests.

Predator drones perform sanitized killing on the cheap compared to manned aircraft. Independent experts believe militants are hit about 2% of the time. All others are noncombatants, despite official disclaimers.

In 1995, Predator drones were used for the first time in Bosnia. In 2001, the Global Hawk drone was used in Afghanistan. Throughout the Afghan and Iraq wars, the Pentagon used various type drones for combat and spying missions.

In Libya, Obama authorized Predator drones. They operated throughout the war. They’re also used in Yemen, Somalia, and wherever Washington designates targets to kill.

US citizen Anwar al-Aulaqi was assassinated this way. So can anyone anywhere on America’s hit list, including perhaps domestically before long.

Washington plans escalated drone killing, as well domestic spying on Americans. Currently, around one in three US warplanes are drones. One day perhaps they’ll all be unmanned.

Drones carry surveillance equipment, including video cameras, infrared ones, heat sensors, and radar for sophisticated virtually constant spying. Newer versions carry super high resolution “gigapixel” cameras. They enable tracking above 20,000 feet. They can monitor up to 65 enemies simultaneously, and can see targets up to 25 miles away.

Even domestically, drones may be weaponized with tasers, bean bag guns, and other devices able to harm or perhaps kill.

Currently, the US Customs and Border Protection uses UAVs for surveilling borders. State and local law enforcement agencies also use them to investigate “cattle rustling, drug dealing, and the search for missing persons.”

Flying above 400 feet requires FAA certification. Information’s unavailable on who obtained authorizations for what purposes.

“Drones give the government and other (UAV) operators a powerful new surveillance tool to gather extensive and intrusive data on Americans’ movements and activities.”

“As the government begins to make policy decisions about the use of these aircraft, the public needs to know more about how and why these drones are being used to surveil United States citizens.”

Drones “could dramatically increase the physical tracking of citizens – tracking that can reveal deeply personal details about our private lives. We’re asking the DOT to follow the law and respond to our FOIA request so we can learn more about” what the public has a right to know.

The Supreme Court hasn’t been people friendly on many issues, including privacy. In United States v. Place (1983), the court held that sniffs by police dogs trained to detect illegal drugs aren’t searches under the Fourth Amendment.

They’re sui generis, intended only to reveal the presence or absence of narcotics. In other words, Fourth Amendment protections don’t apply to non-human searchers. As a result, privacy rights are on the chopping block for elimination. Already, in fact, they’re gravely compromised under institutionalized Bush administration surveillance policy.

In 2007, the Department of Homeland Security (DHS) authorized spying through the National Applications Office (NOA). It was described as “the executive agent to facilitate the use of intelligence community technological assets for civil, homeland security and law enforcement purposes within the United States.”

With or without congressional authorization or oversight, the executive branch may authorize state-of-the-art technology, including military satellite imagery, to spy on Americans covertly.

Though initial plans were delayed, eye in the sky spying ahead potentially will monitor everyone everywhere once full implementation’s achieved. Included will be thousands of Big Brother drones watching.

On February 3, the FAA Reauthorization Act (HR 658) cleared both houses of Congress after differences between Senate and House versions were resolved. Expect Obama to sign it shortly.

It authorizes domestic drone spying under provisions to test and license commercial drones by 2015. Estimates of up to 30,000 UAVs could overfly America by 2020. Privacy advocates are concerned. Steven Aftergood, head of the Federation of American Scientists’ Project on Government Secrecy, said:

“There are serious policy questions on the horizon about privacy and surveillance, by both government agencies and commercial entities.”

According to Electronic Privacy Information Center’s Amie Stepanovich, “Currently, the only barrier to the routine use of drones for persistent surveillance are the procedural requirements imposed by the FAA for the issuance of certificates.”

America’s expected to account for about 70% of global growth. In 2011, Congress, DOD, state and local governments, as well as AUVSI pressured the FAA to review and expand its current “Certificate of Authorization or Waiver (COA)” program related to unmanned aircraft (UA).

The agency’s also examining its own rules for small UAs. It’s expected to authorize expanded COA use shortly.

(1) to simplify and accelerate permission for drone operations. The agency’s already working on loosening regulations by spring 2012.

(2) to establish a pilot project within six months for six test zones to integrate drones “into the national airspace system.”

(4) after submitting a comprehensive plan, publish final rules within 18 months to allow civil operation of small (under 55 pounds) drones in America’s airspace.

On December 15, the ACLU published a report titled, “Protecting Privacy From Aerial Surveillance: Recommendations for Government Use of Drone Aircraft,” saying:

They’re coming to America. Privacy may be seriously compromised. Protections are urgently needed. The report recommends that “drones should not be deployed unless there are grounds to believe that they will collect evidence on a specific crime.”

“If a drone will intrude on reasonable privacy expectations, a warrant should be required.” The report also urges “restrictions on retaining images of identifiable people, as well as an open process for developing policies on how drones will be used.”

Overflying America with drones unrestrained changes the game. A “surveillance society” will be institutionalized to monitor, track, and record “our every move.”

Given a bipartisan penchant for spying, expect the worst. Privacy, like other civil and human rights, is fast disappearing under policies in place or coming to destroy it.

Stephen Lendman lives in Chicago and can be reached at lendmanstephen@sbcglobal.net. 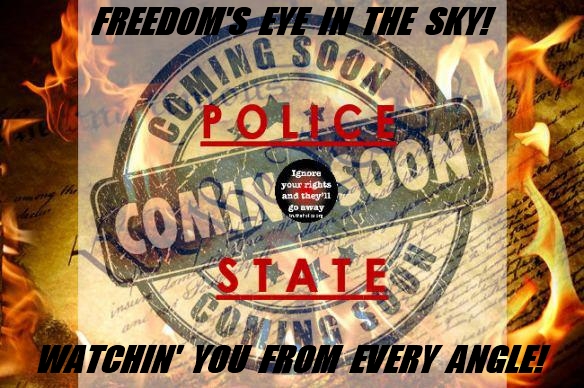