A jury must decide “beyond reasonable doubt” if a person is guilty. But this hollow and meaningless phrase confounds justice – so why not borrow from science to ensure a fair verdict? 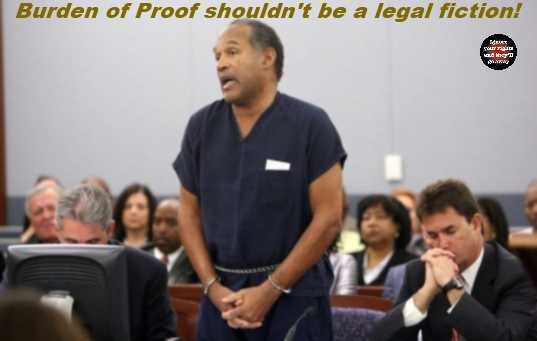 OJ Simpson speaks in court prior to his sentencing.

[From Original Photograph by: Getty Images]

In a court of law – say, at a murder trial – a jury is asked to decide, beyond reasonable doubt, whether a person is guilty or not guilty. In several jurisdictions, including 34 states of the US, a guilty verdict may result in an execution. Numerous cases are on record where later evidence not available at the time of trial, especially DNA evidence, has cast retrospective doubt on a guilty verdict and in some cases led to a posthumous pardon.

Courtroom dramas accurately portray the suspense that hangs in the air when the jury returns to deliver its verdict. All, including the lawyers on both sides and the judge, hold their breath while they wait to hear the foreman of the jury pronounce the words “guilty” or “not guilty”. However, if the phrase “beyond reasonable doubt” means what it says, there should be no doubt of the outcome in the mind of anybody who has sat through the same trial as the jury. That includes the judge who, as soon as the jury has delivered its verdict, is prepared to give the order for execution – or release the prisoner without a stain on his character.

And yet, before the jury returned, there was enough “reasonable doubt” in that same judge’s mind to keep him on tenterhooks waiting for the verdict.

American weather forecasters deliver probabilities, not certainties: “80 per cent probability of rain”. Juries are not allowed to do that, but it’s what I felt like doing when I served on one. “What is your verdict, guilty or not guilty?” “Seventy-five per cent probability of guilt, m’lud.” That would be anathema to our judges and lawyers. There must be no shades of grey: the system insists on certainty, yes or no, guilty or not guilty. Judges may refuse even to accept a divided jury and will send members back into the jury room with instructions not to emerge again until they have somehow managed to achieve unanimity. How is that “beyond reasonable doubt”?

In science, for an experiment to be taken seriously, it must be repeatable. Not all experiments are repeated – we have not world enough and time – but controversial results must be repeatable, or we don’t have to believe them. That is why the world of physics is waiting for repeat experiments before taking up the claim that neutrinos can travel faster than light.

Shouldn’t the decision to execute somebody, or imprison them for life, be taken seriously enough to warrant a repeat of the experiment? I’m not talking about a retrial. Nor an appeal, although that is desirable, and happens when there is some disputed point of law or new evidence. But suppose every trial had two juries, sitting in the same courtroom yet forbidden to talk to each other. Who will bet that they would always reach the same verdict? Does anybody think a second jury is likely to have acquitted O J Simpson?

My guess is that, if the two-jury experiment were run over a large number of trials, the frequency with which two groups would agree on a verdict would run at slightly higher than 50 per cent. But anything short of 100 per cent makes one wonder at the “beyond reasonable doubt” held to be sufficient to send somebody to the electric chair. And would anybody bet on 100 per cent concordance between two juries?

Isn’t it enough, you may say, that there are 12 people on the jury? Doesn’t that provide the equivalent of 12 replications of the experiment? No, it doesn’t, because the 12 jurors are not independent of one another; they are locked in a room together.

Anybody who has ever been on a jury (I’ve been on three) knows that authoritative and articulate speakers sway the rest. Twelve Angry Men is fiction and doubtless exaggerated, but the principle remains. A second jury without the Henry Fonda character would surely have found the boy guilty. Should a death sentence depend on the lucky break of whether a particularly perceptive or persuasive individual happens to be picked for jury duty?

I am not suggesting that we should introduce a two-jury system in practice. I suspect that two independent juries of six people would produce a fairer result than a single jury of 12, but what would you do on those many (as I suspect) cases where the two juries disagreed? Would the two-jury system amount to a bias in favour of the defence? I can’t suggest any well-worked-out alternative to the present jury system, but I still think it is terrible.

I strongly suspect that two judges, forbidden to talk to each other, would have a higher concordance rate than two juries and might even approach 100 per cent. Yet that, too, is open to the objection that the judges are likely to be drawn from the same class of society and to be of similar age to each other, and might share the same prejudices.

What I am proposing, as a bare minimum, is that we should acknowledge that “beyond reasonable doubt” is a hollow and empty phrase. If you defend the single-jury system as delivering a verdict “beyond reasonable doubt”, you are committed to the strong view, whether you like it or not, that two juries would always produce the same verdict. And when you put it like that, will anybody stand up and bet on 100 per cent concordance?

If you place such a bet, you are as good as saying that you wouldn’t bother to stay in court to hear the verdict, because the verdict should be obvious to anybody who had sat through the trial, including the judge and the lawyers on both sides. No suspense. No tenterhooks. There may be no practical alternative, but let’s not pretend. Our courtroom procedures make a mockery of “beyond reasonable doubt”.

Richard Dawkins was the New Statesman’s guest editor for the Christmas 2011 issue.